“This year, we have added new areas for snow and ice removal, including pedestrian pathways, arterial corner ramps, bus stops, and some steep laneways that will help us in collecting garbage and recycling." 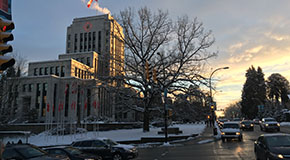 With snow in the forecast over the winter holidays, the City is initiating its snow plan and reminding residents of what they can do to stay safe.

“When snow or freezing temperatures are predicted, engineering crews ensure that our major streets are salted, brined, or plowed depending on the conditions,” says Jerry Dobrovolny, General Manager of Engineering Services for the City of Vancouver. “This year, we have added new areas for snow and ice removal, including pedestrian pathways, arterial corner ramps, bus stops, and some steep laneways that will help us in collecting garbage and recycling. It is important for residents to remember that it is not in our plan to plow local streets, as is typical of primarily rainy-climate cities such as ours.”

City crews work 24 hours a day and liaise with a meteorologist for tailored Vancouver-specific weather predictions in order to prepare ahead of snow and ice.

Based on the lessons learned over the 2016/2017 winter, the City has adopted recommendations for improvements to enhance service to residents when snow falls.

Improvements include expanded coverage locations, increased salt storage, and prioritized service response times. The City has also added new vehicles to the fleet that are adaptable for use in all seasons. The vehicles will enable crews to access some neighbourhoods and lanes more easily to support garbage and green bin collection.


What residents can do to prepare for winter

Prepare your snow gear early: Make sure you have shovels, snow boots, snow tires, and salt before the first big snowfall.

Connect with us on the go, 24 hours a day, seven days a week on the VanConnect App.

Use the app to report snow causing flooding, issues with transit shelter access, uncleared sidewalks, and any other street maintenance issues.
Download VanConnect at the AppStore, Google Play, or for Blackberry.

Find more information about how to prepare for winter weather