Just one of the many reasons for loving where we live

Over Spring Break my friends and I made a trek half-way up the Lynn Headwaters trail in North Vancouver. This is a fairly easy hike of about 12 km there and back, though we did run into snow and icy trails. Here is a photo taken on the way back down. 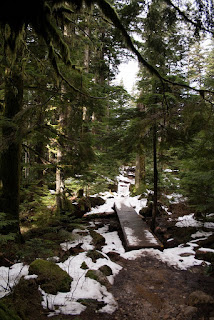 photo: Louis Lapprend
There are lots of hikes in the lower mainland for every level of hiker. Getting into the great outdoors is easy. This hike is accessible by public transit.
Posted by Stuart Mackinnon at 9:27 AM No comments:

Last week I wrote about a proposal to change the way the park board names public spaces. I heard from several people with concerns, including former Green Party commissioner Stuart Mackinnon and former NPA commissioner Ian Robertson, as well as former park board candidate Jamie Lee Hamilton.

“This new measure is anti-democratic since elected members of the park board will have undue influence regarding park names,” Hamilton wrote in an email to the Courier. “They will be able to instruct staff on the name they want for a particular park. This method will allow them to suggest names of friends or political insiders. Cronyism will creep into what was until now a fair and democratic process…”

In what looks like a response to comments and concerns from the public, the naming proposal has been withdrawn from the park board’s agenda for tonight’s meeting.

Posted by Stuart Mackinnon at 11:16 AM No comments:

Guidelines approved in 2007 give community a voice over elected officials on naming parks. Monday vote will change that.

Names are important. They are how we identify ourselves, each other, and our community. The names of public spaces are equally important as they are identifiers of place, purpose, and sometimes historical perspective and significance. Nathan Philips Square in Toronto not only identifies a place, but also a centre of activity and a remembrance of a significant individual in the history of that city. Central Park in New York, Tiananmen Square in Beijing and Stanley Park here in Vancouver all conjure up images, for good or bad, in the minds of both users and visitors.

Names are important which is why in 2007 the Vancouver Board of Parks and Recreation changed its naming policy to better reflect community values and ideas. Prior to 2007 park naming was done by a staff report and a vote by the Commissioners of the day. This method can lead to political interference and the naming of parks and public spaces after friends and allies of the particular Board of the day with no recourse for the community.

This all changed with the naming of a small park in Marpole. Many people came out to a committee meeting of the Park Board with name suggestions for this new park. The ideas ranged from honouring environmentalist David Suzuki, and author and former resident Joy Kogawa, to the name of the street the park is situated on. There was no consensus and so the Commissioners put off the decision to another meeting.

At that follow-up meeting I prepared a draft policy resolution that would take the naming of parks out of the hands of staff and politicians and put it firmly into the hands of the community. This draft was adapted by staff and became the new protocol for park naming. The 2007 protocol was created to stop any hint of favouritism and to put the authority in the community.

Under this policy whenever a new park was to be named a committee of neighbourhood community members would be struck. They would solicit ideas, research the relevance, seek community input and then recommend a name to the Board. This process was successful in the naming of Ebisu Park in Marpole and Oak Meadows Park at 37th and Oak.

On March 26th the new Board wants to revert back to the old system, whereby staff will lead the process and the Commissioners choose the name.

It seems more than coincidental that at the last meeting of the Board Commissioners passed a motion to fast-track the naming of a park for former City Councillor and community activist Jim Green. In fact in this week’s Georgia Straight, Vice-Chair of the Park Board Aaron Jasper suggested that the new park at Trillium (in the Strathcona neighbourhood) would be good spot to honour Mr. Green. While Mr. Jasper might be correct, should it not be the community that decides this and not the Commissioners?

There are many individuals that could be honoured here. Milton Wong was a tireless advocate for both the Chinatown/Strathcona community and for the city at large, and could be a worthy choice for honouring. The park at Trillium is primarily a sports facility and could easily be used to honour the memory and accomplishments of track and field athlete Harry Jerome. The point here is that it isn’t any one individual or group of politicians who should be naming this or any other park, but rather that it should be named by members of the community to honour that community and reflect its values.

The proposal coming to the Park Board on Monday is regressive, and it would appear done in the name of expediency. The Staff report says the current process takes too long and involves too many steps. This is nonsense. Perhaps the current method takes a bit longer, but it is the way for the community to make the decision.

Sometimes democracy takes a little longer. But it is worth it.

Posted by Stuart Mackinnon at 3:42 PM No comments:

A former park board commissioner says a proposal to change the way parks and public spaces are named by the Vision Vancouver-dominated park board opens the door to nepotism.

Stuart Mackinnon served one term on the park board as a Green Party commissioner until last November.

Mackinnon says if the proposal is approved, the change means the community has less say in naming parks and public spaces, while the politicians have more. He says this is the way parks were named before 2007, when it was decided the community should lead the naming process.

According to a parks staff report, there are a number of new parks that will be named within the next two years. As a result, the report says the way things are done today is too "resource consuming."

In an email to the Courier, Mackinnon said under the new protocol it will be staff that solicits ideas and then prepares a report to the commissioners, who will then choose the name.

"This can lead to political interference and the naming of parks and public spaces after friends and allies of the particular board of the day with no recourse for the community," says Mackinnon. "The 2007 protocol was created to stop any hint of favoritism and to put the authority in the community."

Vision Vancouver vicechair Aaron Jasper says the power will still be in the hands of the public. He adds it was staff that suggested the change because today's process is too cumbersome.

"We're not returning to the good old days when sitting commissioners sat around the table naming parks after themselves," says Jasper. "This just offers a more balanced approach."

One Step Forward, Two Steps Back: Vision Wants to Take Back Naming Rights to Parks

Under the current protocol a committee of community volunteers seeks names from the community for parks and public spaces and then makes a recommendation to the Board. This allows the community to make the decision. Under the new protocol, staff will solicit ideas and then prepare a report to the Commissioners. Then the Commissioners will choose the name. This can lead to political interference and the naming of parks and public spaces after friends and allies of the particular Board of the day with no recourse for the community. The 2007 protocol was created to stop any hint of favouritism and to put the authority in the community.

This is a regressive motion done in the name of expediency. The Staff report says this process takes too long and involves too many steps. This is nonsense. Perhaps the current method takes a bit longer, but it is the way for the community to make the decision. Sometimes democracy takes a little longer. But it is worth it.
Posted by Stuart Mackinnon at 9:34 PM No comments:

When More Is Less

The city budget passed which will mean fewer services and less maintenance for parks and recreation in Vancouver. While the city did increase the budget allocation to parks, it was not enough to meet the costs of the department.

For years the Vancouver School Board has been saying that they have been underfunded, even though the provincial government says funding has been growing each year. This has never been more evident than the last few years when Vision Vancouver has had a majority on the school board. While the provincial government is correct in saying funding has increased, the school trustees are also correct in that they are underfunded. Say what? This is because increases have not kept pace with inflation and other costs that have risen more than the increase in funding. This has resulted in years of under-funding.

The same is true at the Park Board. While the Vision Vancouver city council rightly says funding for parks and recreation has increased, this increase has not kept up with costs, thereby creating a situation similar to the school board's under funding. What gets me is that Vision Vancouver criticizes the provincial government for the same thing that they themselves are doing.

I once debated this issue with a provincial cabinet minister and took the opportunity to teach him a basic lesson in arithmetic. I told him that "when funding goes up by two cents but costs go up by five cents, there is still a shortfall of 3 cents--this is called underfunding. But we are not talking about pennies but millions of dollars". Perhaps Vision Vancouver needs the same lesson in arithmetic.
Posted by Stuart Mackinnon at 8:39 AM No comments: