Vancouver Park Board wants nature in the city, not an urban jungle 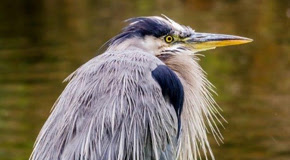 Vancouver Park Board has approved a comprehensive plan to increase the size and quality of Vancouver’s natural areas including:

The Biodiversity Strategy will expand vital habitat for:

At a regular Board meeting last night, Commissioners unanimously approved the implementation of a new eleven-part action plan to promote, protect, and enhance the urban wildlife that Vancouverites cherish.

"Our Biodiversity Strategy lays the foundation for the sustained ecological health of our city,” says Park Board Chair, Sarah Kirby-Yung. “It’s the road map for improving access to nature for all Vancouverites and ensuring biodiversity is a celebrated part of city life well into the future.”


Read the the Biodiversity strategy

With this strategy the Park Board continues to look beyond its traditional role as a custodian of green spaces, with a vision for an urban environment in harmony with nature. A good example is its creation of Hinge Park and Habitat Island at Olympic Village.

“Hinge Park is a prime example of how with a little creativity we can introduce novel habitats for biodiversity into dense urban neighbourhoods,” says Nick Page, Park Board biologist. “Thanks to the success of Hinge Park we’re actively exploring similar opportunities across the city.”

Herring now spawn on the cobble intertidal zone of Habitat Island while surrounding willow and shrub thickets provide a rich habitat for songbirds.

A pair of beavers made the Hinge Park wetland their home in summer 2015. They've cut down trees and shrubs for food and lodge building material, but they are also well-loved by many in the local community as a symbol of Vancouver's relationship with nature.

Similar success stories exist across the city where, with a little ingenuity, the Park Board is protecting, restoring and enhancing the size and quality of Vancouver’s natural areas.

Working with community partners Park Board has restored close to 13 hectares of forests in:
The Biodiversity action plan will restore or enhance an additional 25 hectares of natural areas by 2020 – that’s more than 25 football fields!

Through Park Board conservation work, Stanley Park continues to play host to one of the largest urban great blue heron colonies in North America.

The Park Board is working closely with Port Metro Vancouver on restoring shoreline and sub tidal habitats along Burrard Inlet. The restoration of the salt marsh at New Brighton Park is expected to be the first of its kind in British Columbia.

Park Board is leading the Urban Forest Strategy and will restore native forests in Stanley Park, Jericho Beach Park, Musqueam Park, Everett Crowley Park, Renfrew Ravine Park, and other parks.
It plans to distribute up to 3,000 low cost trees during a spring planting event to encourage you to grow the urban canopy.

Other planning actions under the new strategy

Other planned actions under the new strategy include:

Report Back on Refugee Motions

On December 14, 2015, the Vancouver Park Board debated 2 motions concerning refugees.  Here is the staff report back on those motions:

In the motion titled “Refugee Support” (Mackinnon/Wiebe), staff were directed to work with community partners to welcome and support refugees living in Vancouver and to report back on measures taken.  The motion titled “Responding to the Syrian Refugee Crisis” (Evans/Mackinnon) was referred to staff to examine the possibilities of using vacant caretaker suites as temporary housing for Syrian refugees.  Following is an update on the initiatives and actions taken to date.

The Government of Canada announced its Syrian refugee resettlement plan with the goal of relocating 25,000 Syrian refugees who are currently living in Turkey, Lebanon or Jordan.  As of January 22, 2016, the resettlement goal of 10,000 Government Assisted Refugees (GARs) relocated to Canada by January 1st and another 15,000 settled by March 1st, has been extended.  Vancouver immigrant and refugee service agencies require additional time to find permanent homes and have requested a pause of 5 days in accepting new refugees.  Overall, it is expected that 2500–3000 GARs (10%–12%) will settle in British Columbia: 300 in Vancouver, 900 in Surrey, 600 in Coquitlam, and 120 in New Westminster.

Additionally, an estimated 5,700 Privately Sponsored Refugees (PSRs) are expected within the same time frame. As noted on the Government of Canada website, "in an effort to minimize security risks and provide a new home for vulnerable refugees, Canada has asked UNHCR to prioritize vulnerable refugees who are a low security risk, such as women at risk and complete families".

The Park Board is represented by Darren Peterson, Acting Manager of Recreation City-wide Services and Paul Czene, Recreation Coordinator, Access and Volunteer Service.

ISS of BC provided members with an overview of the settlement process and a flowchart of the “Key Phases for Syrian Refugee Movement to Metro Vancouver”.  This flowchart indicates the timeline from initial reception to settlement and the various steps and needs along the process.

The Park Board’s Leisure Access Program (LAP) reduces accessibility barriers for immigrants, refugees, and the undocumented.  In recognition of the importance of connecting refugees to their new communities, the LAP has created an expedited 3rd Party Referral process in coordination with immigrant and refugee serving agencies.  This process provides same day service at the closest Vancouver recreational facility.

It is projected that 36% of the Syrian refugees will be under the age of 19.  As such, Park Board Community Youth Workers have been provided special briefings in preparation for the expected high need for youth support and services for the refugees settling in Vancouver.

On December 14, 2015, the Board motion “Responding to the Syrian Refugee Crisis” was referred to staff.  This motion proposed that staff “examine all currently unoccupied and uncommitted former caretaker suites” to determine whether any could be used “as temporary accommodation for government sponsored refugees from Syria”.

Staff have reviewed the park fieldhouse inventory and identified eight vacant caretaker suites that have not yet been committed to other uses – all of which are completely unfurnished.  When considering whether any of the available suites would be appropriate accommodations for vulnerable refugee populations, staff noted the following concerns:
•          Limited Space - caretaker suites are very small, suitable for 1-2 people; the understanding is that most of the current refugees are arriving as families;
•          Social Isolation – fieldhouses are stand-alone buildings without close neighbours; parks are closed to the public after hours; locations do not offer convenient access to amenities and services;
•          Public Pressure - residents would be perceived to be park caretakers or staff; the public will approach with questions and concerns regarding the park, maintenance of public washrooms, facility access, and other issues;
•          Safety & Security – fieldhouse residents are exposed to user conflicts, substance misuse in and around the facilities, vandalism, after-hours loitering, homeless populations, and other situations that could create discomfort and impact feelings of safety and security.

While there are two locations that may offer less isolation (closer to amenities), the other factors listed above would still apply.  As well, it is important to note that the Fieldhouse Activation Program is gearing-up to put out a Request for Expression of Interest (RFEOI) to local community sport, art & culture, food, and environmental groups in exchange for community programming.  The current plan is to advertise and promote all eight vacant caretaker suites as opportunities for residencies and community activations.  Staff were expecting to post the RFEOI in March and have community groups move-in to the caretaker suites by May 1, 2016.
Staff are continuing to work with City and key partners to welcome Syrian refugees to Vancouver and to provide the ongoing community support and connections they require. The processes developed through this collaborative response effort will help inform the Park Board's practices for providing refugee support moving forward.

Posted by Stuart Mackinnon at 8:34 PM No comments:

In the attached letter,  Kirby-Yung advised the Mayor that the elected Commissioners have serious concerns regarding the illegal, unsanctioned and unpermitted event and that the Board does not support 4/20 taking place at Sunset Beach Park or any other park.

“We respectfully request that you direct City staff immediately to work with organizers to identify an alternate location to Sunset Beach, respecting the will of the Board and the Parks By-Law prohibiting smoking,” said Kirby-Yung.

The Park Board Chair asked the Mayor for meeting with appropriate staff – at the earliest opportunity - to work together to identify an alternate location for a safe and orderly 4/20 event.

Should an alternate location not be found, the Park Board Chair advised the Mayor that she expected that all costs in ensuring public safety, refuse collection and repair of any damage to the park or beach and any legal liability arising for any unfortunate accidents or injuries at 4/20 in Sunset Beach Park should be borne by the City of Vancouver.
- 30 –
Media Contact: 604-257-8699
Vancouver.ca/parks
Posted by Stuart Mackinnon at 11:12 AM No comments:

The Vancouver Park Board has approved a plan to enrich the natural environment of the city.
Park commissioners voted unanimously on Monday (February 1) in favour of a biodiversity strategy to restore or enhance 25 hectares of natural areas by 2020.

“It’s the road map for improving access to nature for all Vancouverites and ensuring biodiversity is a celebrated part of city life well into the future,” park board chair Sarah Kirby-Yung said in a statement.

Another measure is the improvement of the ecosystem health of False Creek, Still Creek, and Musqueam Creek.

“While the Biodiversity Strategy emphasises the importance of native ecosystems and species, it also recognises the value of urban habitats such as green roofs, constructed wetlands, and pollinator gardens in supporting biodiversity within the city,” the staff report explained.

The target of 25 hectares is roughly the size of the VanDusen Botanical Garden, and half the area of the Langara Golf Course, according to staff.

Staff also noted that Stanley Park accounts for 28 percent of the total area of parks in Vancouver, and around 67 percent of all natural areas in the city.

“Biodiversity is interwoven into Vancouver’s urban landscape: migrating songbirds nest in our forests, salmon spawn in our remaining streams, and tall trees define some of our most important parks,” according to staff.

Staff also emphasized that biodiversity is “part of a healthy city, access to nature sustains the mental and physical health of Vancouver’s citizens”.

Posted by Stuart Mackinnon at 8:16 PM No comments: