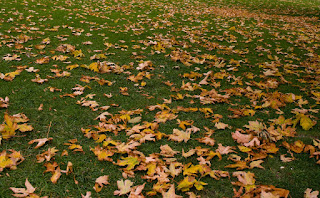 As the weather finally changes and before we have to bundle up for the winter chill I wanted to share a few thoughts and some great photos from my friend Louis. Autumn is definitely my favourite season. There is something magical about this time of year. I love the colours and the hint of chill in the air. The smells are terrific. Spring always smells fresh, but autumn has a distinctive smell that always reminds me of my childhood. I know it is politically incorrect--especially for a Green--but I have to admit that I miss the smell of burning leaves. I recall coming home after soccer practice as a lad on a Saturday to find my Dad burning the leaves we had raked earlier in the week in an old oil drum in the back yard. We would stand around and chat, watching the smoke and the fire. I loved that time with my Dad. It is a good thing we don't burn leaves any more, but it is a childhood memory I will always cherish. 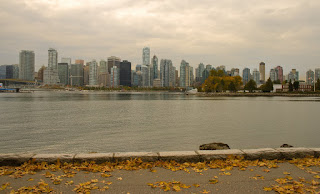 Vancouver is especially beautiful at this time with the juxta-position of the leaden sky and the trees with their turning leaves. I hope everyone who reads this has taken the time to go for a walk around Stanley Park, or even just through your neighbourhood and seen nature in all its blazing glory. It is hard not to be in awe at the beautiful display. If you have ever wondered where I got my slogan "People and Nature in Balance" for my campaign from, just step outside and look at the autumnal city.

Photos by Louis Lapprend (c) 2009 used with permission
Posted by Stuart Mackinnon at 9:50 PM No comments:

There is a terrific article in the Courier this week about former Park Board employee (now retired) Jim Lowden and what happened to the wood from the trees that fell during that terrible wind storm of 2006. Check it out.
Posted by Stuart Mackinnon at 9:48 PM No comments:

Probably the thorniest issue that comes before the Park Board concerns dogs. Love 'em or hate 'em, everybody seems to have an opinion. At the most recent meeting of the Planning and Environment Committee a proposal for new off leash areas at Devonian Park and Stanley Park (Ceperley picnic area)as well as extended hours in Portside and Fraser River parks was brought forward. All four were forwarded to the full Board for decision.

The Devonian Park proposal is long over due because of the increased density of the area. The difficulty here and at Ceperely is the abundant wildlife in the area and the proximity to Stanley Park. I suggested that at Devonian the entire proposed off leash area be fenced and staff will look at the cost. The Ceperely area is even more challenging. The Stanley Park Ecological Society spoke at the meeting to this. It is close to the Heron roosts and is in a woodpecker nesting zone. I don't believe there should be any off leash areas within Stanley Park and will advocate for that at the Board meeting.

Portside was simply a change in hours, making it an all day off leash area in the winter months. The staff proposal for Fraser River Park was similar, however some Commissioners suggested that the entire park should be off leash all year. I spoke against this. As there are only two foreshore parks along the Fraser this would mean that people who do not want to encounter off leash dogs would lose 50% of their foreshore public space.

In an urban area we have to accommodate dogs in our parks, and we should be able to share the space. I do not believe valuable foreshore area should be given over to one user group to the exclusion of others. I believe that a portion of the park can be used off leash within reasonable limits in the summer and perhaps that portion could have unlimited access off leash during the winter. I cannot support giving over the entire park all year.

Watch the agendas for the meeting when this issue will come before the full Board.
Posted by Stuart Mackinnon at 6:08 PM No comments:

Just a quick update to let you know that after a lot of really good discussion around access and finance, my motion to supply soap and warm water at all Park Board amenities passed unanimously at the October 5 meeting of the Vancouver Board of Parks and Recreation.
Posted by Stuart Mackinnon at 12:59 PM No comments: