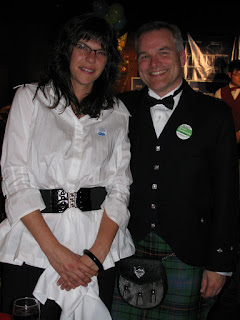 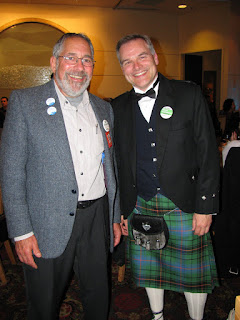 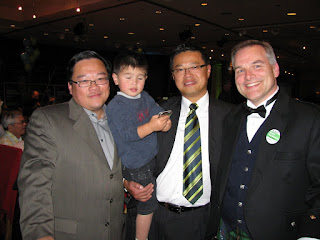 Candidates in market for local food

“They’ve grown enormously over these past few years. I think everyone in this city wants to see a stronger and more secure place for farmers’ markets.”

Woodsworth said the markets exemplify the idea of growing locally and said the city needs a building so that they can be held year round.
Posted by Stuart Mackinnon at 7:00 AM No comments:

November 4 @ 7 pm Kerrisdale Community Centre located at the corner of West Boulevard and 42nd
Posted by Stuart Mackinnon at 11:40 AM No comments:

Campaign for Better Parks under way!

You can visit my new website betterparks.ca now for information about my campaign for Parks Commissioner in Vancouver. If you would like a sign or want to donate you can do so at the betterparks site. Our campaign headquarters official opening will be announced shortly. More coming up!
Posted by Stuart Mackinnon at 3:42 PM No comments:

Green candidate gets the nod from Vision, COPE

Parks board candidate Stuart Mackinnon says the Vancouver Green Party made a deal with COPE and Vision Vancouver for the civic election because of its enthusiasm for Vision's mayoral candidate.

"From our end we endorsed the agreement because we believe the greenest mayor Vancouver will ever have will be Gregor Robertson," said Mackinnon.

Last week the local Green Party announced it had reached an agreement to work cooperatively with Vision and COPE and to endorse Gregor Robertson for mayor. The deal is not being called a joint campaign or a coalition, but the parties agreed not to have any overlap in candidates nominated to run for council, school board and parks board.

Mackinnon, a teacher at Killarney secondary school, said the deal will also allow the Green Party to meet with elected officials twice a year to discuss council and school board issues.

"They left one space for the park board because parks and the Green Party go hand in hand," said Mackinnon. "It was a natural choice."

Mackinnon said the agreement acknowledges the Vancouver Green Party as a player in municipal politics. He added the Green Party has a local core base of 27,000 supporters.

"Realistically that number is much smaller than what COPE and Vision have," he said. "So we decided, why split the vote?"

Mackinnon said when he ran for a seat on parks board in the last civic election he increased the party's vote by 10,000. In the 2005 municipal election Mackinnon was 6,000 votes short of election to the parks board.

Mackinnon said recent parks board decisions show a trend toward creating destination attractions, when the focus should be on community amenities. He cited the closure of the outdoor pool at Sunset Community Centre, as well as the looming closure of the Mount Pleasant outdoor pool, as examples. The parks board is building a new aquatic centre at Riley Park designed to serve several communities, including Sunset and Mount Pleasant.

"Neighbourhoods are the core of the city," said Mackinnon. "It's one thing to let your kids walk down the block to their neighbourhood pool and another to put them on a bus."

Mackinnon has also been active in the effort to re-green Hastings Park. He added despite the fact a casino was built on the property--against the wishes of numerous neighbours and community groups, much more can be done to create additional green space there.

"I had a wonderful youth in Vancouver," said Mackinnon. "It was almost magical with trips to the beach and outdoor pools and to the park. I want to give that to the children of today."

Political analyst Kennedy Stewart said the Greens "wouldn't have a prayer" without the endorsement of Robertson.

"But now at least they have a shot, or at least a much better chance," said Stewart, a political scientist at SFU.

He said COPE is in the same position after agreeing to run fewer people and not run a mayoral candidate. Stewart said the deal means COPE might end up with two members on council instead of a single councillor, David Cadman.

"It's kind of like one step backwards and two steps forward," he said. "But it's the best they could have hoped for."