It was wonderful to watch the dogs in my neighbourhood frolicking in the fresh snow. They really were like 3 year olds in their joy. I think we adults can learn a lot about snow from children and dogs. They enjoy snow for the pleasure it gives. Never mind about the roads and the buses, they simply enjoy it for the fun.

One nasty drawback though is the thoughtlessness of some dog owners who think that because of the snow they don't have to pick up after their dogs. Today while walking through the melt I noticed an awful lot of dog feces melting along with the snow. A responsible pet owner picks up no matter what the weather. A few selfish individuals taints the whole dog owning public. Please pick up after your dog, it is the neighbourly thing to do--not to mention the law.
Posted by Stuart Mackinnon at 10:59 AM No comments:

Being careful what you ask for...

After one of our information sessions with staff I happened to ask if anyone could tell me which was the smallest park in Vancouver. I had had a discussion with a friend about this and thought one of the managers might have that information. It was asked in passing and when no one knew I didn't think about again until I received an e-mail, a week later, from a senior manager listing the ten smallest parks in the city complete with a photograph of the smallest! I wasn't expecting such an in-depth answer--or really even an answer at all. It made me realize how hard the staff works to keep the elected folks happy and current. Another question I asked, also in passing, was also answered completely and professionally. I'll have to remember not to ask questions in passing unless I really need to know the answer as I don't want to take up the staff's time unnecessarily. 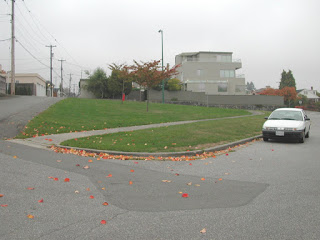 Oh, and the smallest park? Quesnel mini-park at Quesnel Dr. and Mackenzie st.
Posted by Stuart Mackinnon at 6:00 PM No comments:

The Hopes and Fears

The inaugural meeting of the new Park Board was held on Monday night. It was an emotional meeting for many in the room. For the out-going Commissioners it was their last time around the table. For Allan DeGenova that meant the last time after 15 years of service. For the new Board it meant that five new Commissioners were sworn in to join the two who had been re-elected. The ceremony was brief but poignant. It is an awesome task to be elected to public office. The Park Board may be the 'junior' arm of civic government but it nonetheless is a decision making body with fiduciary responsibilities.

I have worked for the past 10 years to improve the parks and recreation system in Vancouver and to protect our green and public spaces. I have many ideas and plans and a few dreams too for the next three years. Many people have supported me and contributed to my election. I owe them a debt of gratitude and the assurance that I will continue to work for the same ideals I have been advocating over the years. Being on the inside will be a very different experience though, with different responsibilities and a much wider constituency.

I thought it was apt that the inaugural meeting is held in December at the beginning of the Christian Advent season. I am reminded of the traditional hymn 'O Little Town of Bethlehem'. One of the lines goes 'the hopes and fears of all the years are met in thee tonight'. I certainly felt a little of that on Monday night.
Posted by Stuart Mackinnon at 11:20 AM No comments: