Some reflections on the election

After a frantic couple of months I am starting to catch my breathe and come to a bit of understanding of what the results of last Saturday mean. I am incredibly humbled and grateful to the voters of Vancouver for their trust. I made some promises which I intend to keep. Respectful negotiations with Community Centre Associations; meaningful consultation with the public, especially around dogs in parks; working to replace the outdoor swimming pool in Mt. Pleasant; work toward a plebiscite on cetaceans in captivity; and maintaining our parks and gardens.

This campaign was different in that I had a running mate (not since 2005 have the Greens run more than one candidate at Parks), and a campaign team. I am so grateful for all the hard work of the volunteers. It made the campaign a lot easier and a lot more fun.

It was different too in that we had some really great independents running. Not only the hard-working and dedicated Jamie Lee Hamilton (actually not an independent, she ran under the IDEA banner), but others like Jenny DiCastris and James Buckshon. It is a shame that party politics have such a stranglehold on Vancouver politics, as these voices were not heard well above the din of the machines lubricated with millions of dollars from developers and other deep pocketed players.

This race was a lot more personal too. Not in a negative way, but in that I was much better known this time around, and people made an effort to tell me they were supporting me and the Green team. Our support came from a very diverse and wide circle. The Green message of openness, collaboration, and working for the common good, resonated in the electorate.

With being elected I will have to step away from my position of Governor of the VanDusen Botanical Gardens, a position I greatly enjoyed. My promise to them is to continue to advocate for all of our parks and gardens and ensure VanDusen continues to be a world-class destination and research garden.

There is much to do over the next four years. We must regain the trust of the public. We must not only do good, but be seen to do good. We must be vigilant against complacency. We must be open, honest, and accessible.

The Vancouver Green's made history. We have elected the largest group of Green members to any government in Canada ever. Two elected to the Park Board is a new milestone, being elected to all three levels of civic government is a new record. We are all grateful to the citizens and know it is an honour and privilege to serve.

Once again, I will take Glissando Remmy's wise words as my creed: ‘I’ll do the best I can, with the resources at hand, for all the people of Vancouver. Period.’
Posted by Stuart Mackinnon at 12:02 PM No comments:

Better Parks are coming (back) to Vancouver

"Thank you Vancouver for electing me to the Board of Parks and Recreation. An awesome responsibility that I accept with humility and gratitude. Vancouver's natural beauty is worth protecting. Neighbourhood services are worth preserving. And you agreed"

That quote was from 2008 when I was first elected to the Vancouver Board of Parks and Recreation.  It still pretty well sums up my feelings this time. Only things are bit different now. Now there are two Green's on the Park Board. My running-mate, Michael Wiebe and I were both elected. This is tremendous as now I will have a partner in this endeavour. It is unfortunate that we are once again facing a majority Board--last time it was Vision Vancouver, this time it is the NPA--which could mean more of the same, but I am optimistic. Optimistic that the NPA majority will be collaborative and not simply wield their majority as though no one else matters. The proof of that may come sooner rather than later.

Already the newly elected NPA have said they will rescind the cetacean breeding ban. How they do this may set the tone for the next four years. Will they simply bring in a motion and use their majority to pass it, or will they set up a collaborative process to examine the decision in more detail. I am hoping for the latter. I sat for three years with a Vision dominated Board who viewed the round table not as a metaphor for collaborative decision-making but as a wheel for crushing anyone who dared to disagree with them.

Regardless of the tone the NPA sets, Michael and I will be there to advocate for natural spaces, parks as parks, collaborative approaches, community consultation, and real Green ideals.We will be part of a larger Green caucus in Vancouver that joins City Councillor Adriane Carr and School Trustee Janet Fraser. We won't be making decisions in secret but will support each other as we face the difficult tasks of managing a city, collaborating on ideas to bring forth, and bringing the public back into the decision making process.

Thank you for giving me another chance to serve my community. Thank you for believing in better parks for Vancouver.
Posted by Stuart Mackinnon at 9:32 PM No comments: 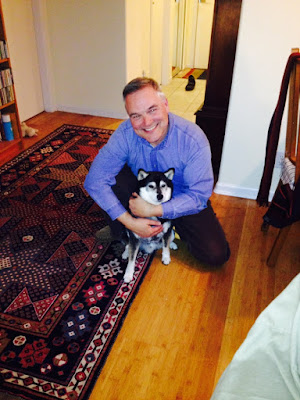 Green park board candidate Stuart Mackinnon relaxes at home with his furry friend as he waits for election results. Photograph By Sandra Thomas

Two hours before the polls closed on the Nov. 15 civic election, Green Party park board candidate Stuart Mackinnon was relaxing at home listening to classical music by Gabriel Urbain Fauré in his small East Side condominium.

"It helps calm me," Mackinnon said.

It must work because, at least by appearance, the high school teacher showed no signs of nerves as the final minutes of this election season wind down. Surrounded by dozens of books, paintings and photographs of Vancouver, more CDs than a thrift store and accompanied by his faithful companion Kiku, the small shiba inu he rescued 11 years ago, Mackinnon was hopeful the Green party will make history tonight by winning numerous seats at council, school board and of course park board. Mackinnon was elected to the park board in 2008, but lost in 2011 placing 12th in the seven seat race with 44,000 votes.

Mackinnon said due to the ongoing dispute between the park board and community centre associations over their joint-operating agreements, more residents than ever are paying attention to this election, which could be one of the reasons for the huge turnout for advanced voting and even on election day.

"These are their communities," said Mackinnon. "While a lot of them don't quite understand all of the nuances of the joint operating agreements, they do recognize there's been a grab for money and power. That they understand."

Posted by Stuart Mackinnon at 9:26 PM No comments:

Vote with your heart and your head

“Remember something, if you will, about voting: Voting is not a horse race, you're not going there thinking "Gee, I gotta pick the winner so I can brag to my friends 'Oh, I picked so-and-so and he or she won'". Voting is voting your heart and voting your conscience and when you've done that, don't ever, EVER let [anyone] tell you that you've wasted your vote because the fact is, if you DON'T vote your heart and conscience then you HAVE wasted your vote.”
― Jesse Ventura

In the quote above, Jesse Ventura was referring to the American electorate and the two party Democratic/Republican system. But it can easily be translated to Vancouver and the 2 party system we have had here over the last 60+ years. In this election we are lucky to have a real choice as the 2 developer-backed parties are being challenged by smaller parties not beholden to any monied backers.

I'm proud to be one of those challenging the status quo. I'm proud to be running on a team with 7 great candidates. In this election the Green Party of Vancouver offers a real alternative. No matter where you put your Xs in Saturday's vote I hope you will consider voting for a mixed Council, School Board and Park Board. And I hope that mix includes 7 Green candidates.

Whatever your choice, vote with your heart and your head. There is no split vote; there is no wasted vote--except if you choose not to vote. That would be a waste.
Posted by Stuart Mackinnon at 5:43 PM No comments: