Budget cuts put the chill on summer fun for kids

The budget cuts the Park Board approved by a vote of 4 to 3 last November will really hit home this summer. These cuts are the result of the City holding the tax increase to 2 1/2% and thus reducing funding to the Park Board. The following parks will have their summer playground programs cut this year:

I thought these cuts were wrong then and still think so now. I believe the taxpayers were willing to pay a little more to keep the services we all think are important. Write to City Council and to the Park Board Commissioners and tell them what you think of these cuts to your neighbourhood services. Hopefully when preparing the budget for next year, they'll listen to what you say.
Posted by Stuart Mackinnon at 6:47 PM 1 comment:

Midterm speculation--What will he do?

I had always heard that in politics summer was the silly season. Seems there isn't enough real news and so people find strange things to dig up or make up. Midterm is a bit of a silly season too. I can't tell you how many people have asked me, in the last little while, if I will run again and if I do, who I will run for.

As an elected Green, I have tried to keep green values always foremost in my decision-making. Other than that, I have tried to look at each motion on its own merits. It doesn't matter to me who puts it forward. If, in my opinion, it is good for the environment, good for the community and fiscally sound, then I would support it.

Some see this as 'playing politics' or 'flirting with the enemy' or 'breaking up the coalition'. I find this amusing. This is politics, I see no enemies on the Board, and I do not belong to a coalition. I have been elected by the people of Vancouver as a member of the Green Party of Vancouver. My mandate is to 'provide, preserve and advocate... to benefit people, communities and the environment' and that is what I try to do.

We are fortunate that this Board has representatives from four different political organizations, and as such there is a broad range of opinions and views. Mostly we get along, and most motions pass without dissent. Sometimes the political heat is raised--especially around fiscal matters, but there have been others--but at the end of the day we all have to work together and by and large we do.

The next election is still a year and a half away and in that time anything can happen. But to quell to queries, I enjoy my work on the Board and I am as committed to green values as I ever was.
Posted by Stuart Mackinnon at 2:14 PM No comments:

On a beautiful day like today it is hard not think that summer has already arrived. Being Vancouver we know that tomorrow might be cool and wet, but as they say, we like to make hay while the sun shines. Not only are the days getting warmer and the sun brighter, but the days are also getting longer and that means that our parks are full of people enjoying themselves a little later. In my neighbourhood lots of families are out enjoying the evening with picnics and BBQ s.

One of the many great amenities to be found in some Vancouver parks are permanent BBQ s. In my park there are two and they are well used. There is something special about being in a park and smelling the food being prepared out of doors. I love the laughter and fun of picnic-ers and love how many people use our parks.

Vancouver parks have something for everybody and are a great way to enjoy the lingering daylight hours.
Posted by Stuart Mackinnon at 2:16 PM No comments:

The Stewardship of Stanley Park

At the last meeting of the Park Board's Planning and Environment committee the topic of a stewardship plan for Stanley Park came up. There was some discussion of just what a stewardship plan is and is not. I will admit that, despite my best efforts, I was unable to articulate clearly enough for some around the table what is meant by a stewardship plan. Here is how the Land Trust Alliance defines it:

A stewardship plan is important to ensure consistent and effective monitoring and stewardship of protected properties over time. Stewardship means planning for and taking the necessary actions over the long term to successfully preserve and protect the natural, cultural, or historical value of a resource asset. Such actions included, as applicable, managing the resource asset, performing regular maintenance and upkeep, providing for necessary monitoring, educating or informing those that might negatively impact upon the resource asset about the need for and/or legal obligation to protect and preserve it, and securing sufficient levels of financial resources to carry out all such necessary actions.

I think it is long overdue to have a stewardship plan for Stanley Park. It will be expensive but I think it will be worth it in the long run. We can no longer take actions within the park without understanding how those actions will effect the overall health of the park. We must understand that what we do to one part will effect the entire park.
Posted by Stuart Mackinnon at 9:43 AM No comments: 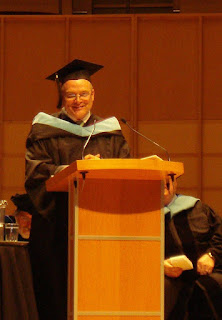 There are certain events in one's life that are so special you wish you could hang onto the moment forever. Last Saturday was one of those. After three hard years of sacrifice and study I walked across the stage at the Chan Centre and was presented with a Masters hood and diploma for my MA Ed in Leadership and Administration. The day was made even more special as I gave my class valediction. My valedictory address was surely more nerve wracking than any political speech I have ever made, as I was speaking to my peers--a daunting task as my class was filled with very fine minds. It was a very proud moment and I was glad to share it with my friends Dr. Julie Wong and City Councillor Andrea Reimer. Conspicuous in their absence were my parents who did not live long enough to witness my achievement. This was all the more poignant as it was the Mothers' day weekend.

My love of learning and my inquisitive mind are what brought me to advocating for parks and natural spaces, just as they led me to teaching. I won't miss the lost weekends spent writing endless papers and reading long academic journal articles, but I will miss the wonderfully challenging classes and my fellow classmates who always inspired me to think in new ways. I was blessed to have had superb professors at the University of Phoenix (Vancouver) who gave of themselves beyond what was called for. Special mention to my mentor and my friend Dr. Joy Ruffeski, who inspired me to pursue my masters degree and then made sure I completed it! We are fortunate to live in a country that values education and I am fortunate to have been able to reach a level of education only dreamt of in my youth.

I will take the summer off from studying and spend some extra time with family and friends and then, who knows. I will always be a lifelong learner. I always figured that when I was too old to learn, then I'd be too old for life.
Posted by Stuart Mackinnon at 9:26 PM 2 comments:

When the press get it wrong

There is an article in today's Courier which says I voted at the last Park Board meeting against a motion to save Beaver Lake in Stanley Park. In fact there was no motion. Commissioner Woodcock attempted to add an amendment to the motion to accept the Stanley Park Ecology Society's state of the park report--and that amendment was ruled out of order. I did vote in favour of accepting the report. The Courier article also says that what I voted against was a plan to save the lake that had been agreed to at an earlier Planning and Environment committee meeting--in fact no plan was presented as the committee meeting wasn't held until two days later.

At the Planning and Environment committee meeting staff brought forward a recommendation to look at all aspects of the report and bring a 'menu of items' to the Board in the autumn and then after careful consideration we would choose which ones to act upon. Beaver Lake will be a priority on that list, but it will not be the only item. Indeed Beaver Lake is not the only area of the park that is in need of remediation, and we must choose which areas and which course of action very carefully. NPA Commissioner Ian Robertson understood this while my COPE and Vision colleagues seemed strangely unaware or unwilling to understand that Beaver Lake is not the only area of the park in need of attention. In the end we agreed with staff, and that a priority would be put on Beaver lake.

One good thing that came out of all this is that staff will also look at the cost of an over all Stewardship plan for the park. I have been asking for this for years--and it was part of my campaign. I am grateful to COPE Commissioner Woodcock for speaking in favour of staff reporting back on this.

It really is time that we stopped looking at Stanley Park as a collection of areas and started looking it at it as a complex, diverse, and interconnected region. We must understand that what we do to one part of the park affects all parts. A stewardship plan will help with future planning as it will look at the park as a whole. After all the whole is greater than the sum of its parts.
Posted by Stuart Mackinnon at 4:30 PM No comments:

Thank you to my readers

It is coming up to the mid-point of my term on the Park Board. I want to take this opportunity to thank the readers of this blog for your comments, both directly to the blog, and through e-mails and conversations with me personally. I hope you have found the information and opinions I have shared useful.

Politics in Vancouver seems to be shifting. I'm not sure which way it is going, but parks and recreation, trees and public amenities have taken a big hit over the last couple of years. The economy has had a lot to do with this as the city tries to balance its budget and find new revenues.

The economy has made a recovery, though of course it isn't at the levels it was at before the downturn. I hope that in the second part of my term we can focus more on the things that make this city great already--making sure we keep what we have, before we start moving in new directions and incurring new expenditures.
Posted by Stuart Mackinnon at 1:17 PM No comments: