Cutting Your Nose to Spite Your Face: Maintenance Cuts Hurt the Bottom Line

For those of us who love the VanDusen Botanical Gardens, this was a bit of a disappointing year. The gardens just weren't as beautiful as they have been in the past. They were a little frayed around the edges. This is not surprising as, like every other garden and park in Vancouver, their maintenance budget was cut this year. This is incredible as the VanDusen is actually a revenue stream for the Park Board. People pay money to view the gardens, and if they don't like what they see they won't come back. In addition to the cuts in gardeners, under the new protocol the Bloedel Conservatory will soon be funded out of VanDusen revenues with no additional support from the City. This will put even more pressure on the VanDusen. I am absolutely thrilled to have the expertise of the VanDusen staff supporting and managing the Bloedel Conservatory, but just as the archives, museum and planetarium are funded by the city, why isn't the Bloedel?

The City has strange priorities when they cut funding to places that actually bring in revenue directly to the City--not to mention all the indirect revenue that tourists and residents alike bring to the City through their dollars spent at sites like VanDusen and Bloedel. We are in great danger of losing our cultural heritage if we don't look after it. Please support the VanDusen and the Bloedel. If you haven't visited in a while get out to them. Now is especially a great time to see the outdoor gardens at VanDusen. The trees are magnificent in their autumn colours. And tell your elected officials that gardens are important. They help our environment and make Vancouver one of the 'greenest' cities in the world.
Posted by Stuart Mackinnon at 9:18 PM 1 comment:

Poor Park Commissioner Aaron Jasper. It seems he just can't get a break. In the Vancouver Courier, columnist Sandra Thomas writes that one of his liaison responsibilities wants to jettison him. Thomas writes in her Central Park article Lazy Liaison? that the Riley Park/Hillcrest Community Centre Association wants to dump Jasper for another commissioner, preferably Nikki Sharma, one of Aaron Jasper's Vision Vancouver colleagues (ouch! that's gotta hurt). When questioned by Thomas, Jasper replied that he doesn't understand the kerfuffle. Thomas reports that Jasper says he's "baffled" by the Riley board's decision. "Actually, I have yet to be invited to one meeting since February," said Jasper. "I've been liaison to this board for three years and was always invited to meetings until Jesse became president."

Well just a minute here. Seems that Commissioner Jasper must have his liaison duties a bit mixed up. Aaron Jasper has not been liaison to this association for the past three years. I was on the Park Board from 2008-2011 and I don't recall Jasper holding that position. I seem to recall that it was another commissioner's responsibility. For further proof just ask former Commissioner Ian Robertson about it. At his I on the City blog, Robertson writes about this in his article Why did Aaron Jasper lie?

Jasper is correct that the usual protocol for Associations is to invite commissioners to meetings--Association meetings are not generally open to the public--but my experience was that some Associations have standing invitations to their liaison.

This is not the first time Commissioner Jasper's hyperbole has gotten in the way of the truth. I was subjected many times to his curious interpretation of the truth. Just one example was the issue of a referendum of the Aquarium. He stated in a press release that I was "knowingly" putting the Park Board at legal risk by discussing the issue--something he knew was false as the the City of Vancouver's legal department had reported to him, as Chair, that the motion was fine.

I suppose one can just put down this kind of thing as not allowing the truth to get in the way of good story, but once again it leads the public to distrust politicians and the whole process. I hope Commissioner Jasper will do the right thing and correct his misstatement. It can't hurt--in fact it can only help in the search for the truth, regardless of whether or not the truth is a good story.

Posted by Stuart Mackinnon at 5:44 PM No comments:

Another year of reduced maintenance in our parks and public spaces 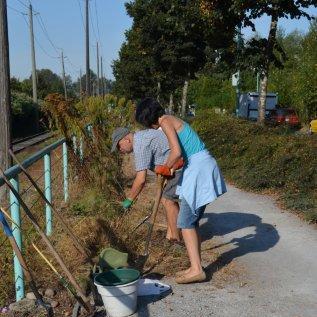 As autumn approaches and the leaves start to change colour and fall to the ground you might wonder what happened to all the city gardeners this past summer. Parks and boulevards looked shabby again this year. The fine folks who maintain our parks and public spaces were around, but there were fewer of them trying valiantly to keep up with all the growth that happens over a warm season like our summer.

In my neighbourhood (Fraserlands) as I have reported before, the people took to the streets to tend the little bits of untended public space. This past weekend they were at it again. The neighbourhood sure looks better for their efforts! A hearty thank you to all involved.

One area that they took on that surely the City should be maintaining is the shared (pedestrian/bike) public path along Kent Ave North. This is well used path but has been fairly quickly disappearing because of the growth of the shrubbery between the pavement and the pathway. A few years ago city/parks crews came out 3 or 4 times a year to keep the greenery at bay. This maintenance dwindle to nothing this year making the path very dangerous for both cyclist and pedestrians. And so the Fraserlands Community Gardening Group with clippers in hand attacked the offending shrubbery. Unfortunately hand clippers are slow and awkward against unwieldy bushes. What could take the City an hour or two with their power tools and professional crew will take several days by volunteer hands. 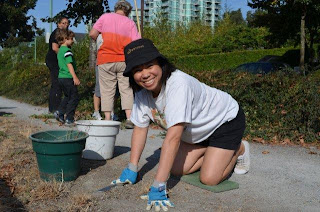 This is doubly galling when you consider that we pay taxes for the maintenance of our public thoroughfares. This volunteerism is a form of double taxation for these kind folks.While taking bits of unused ground and transforming it into a rainbow of colours with lovely flowers is one thing, the maintaining of public thoroughfares is quite another.

I've said it before and I'll probably say it again, cutting the budget for maintenance just doesn't make sense.We all know that allowing graffiti to remain encourages more. Likewise letting public spaces deteriorate encourages vandalism and litter. Call the city (3-1-1) and ask them to cut the boulevards and verges, clean up the garbage, and maintain our parks and public spaces. Write to the Mayor, City Councillors and Park Commissioners and demand that they keep our city beautiful. After all, it is what they they were elected to do.
Posted by Stuart Mackinnon at 9:34 AM No comments: