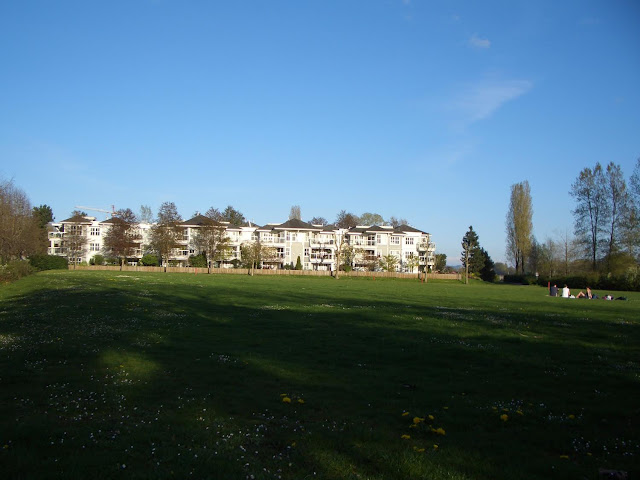 There is a lot of concern in the Fraserlands neighbourhood [an area of Killarney that runs along the Fraser river from the foot of Victoria drive to Boundary road] about a casual playing field attached to Riverfront Park. This field has been a feature in the neighbourhood for a couple of decades and has become integral to the warmth, beauty, and sense of belonging of the community. People play pick up football here. An Ultimate league plays here. Kids learn to play games, adults socialize, lovers picnic, and dogs gambol in this space. Some would call it the heart of the neighbourhood.

This is where folks meet a lot of their neighbours. This is where people congregate to talk, exchange neighbourhood news, and where the community comes out to play. But this might just come to an end because this field...is not a park.

The Vancouver Board of Parks and Recreation has exclusive jurisdiction over parkland in Vancouver. But because this field is not parkland, but city owned land, the Park Board has no control over what happens here. Many would think this strange, as the Park Board maintains this field, programs this field, and in every way looks after it. Strange that a field that appears to be part of Riverfront Park is not. And stranger that the city seems to have plans for this field and has not consulted with the community. At all.

Word spread like wildfire after the city started soil testing. I had many folks approach me asking what was going on. My inquiries resulted in being told that it was just routine maintenance and nothing out of the ordinary. But keen community members delved further and discovered, not easily, that the city actually does have plans for it.

Since the late 80's, when this formerly industrial (Canadian White Pines mill) land was redeveloped into a beautiful residential area, this particular piece of land has been zoned for an elementary school or daycare. The years went by and, as school enrolment and budgets declined, this field was all but abandoned by the city and became an integral part of the local community.

Enter the River District [formerly known as the East Fraser Lands or EFL], the new development between Kerr st and Boundary road. This new community, which will feature more than 10 000 new residents, includes a daycare and a school. But according to one source, who spoke to the City Planner for the EFL, the "city has been unable to find a suitable site in the sprawling East Fraserlands [River District] on which to quickly and cheaply build a child care facility". So they are looking to city land outside the new community.

Casual playing fields are at a premium in any neighbourhood, but are absolutely non-existent in the  Fraserlands. The neighbourhood has a beautiful river walk, a children's playground, and a lovely picnic area with washrooms, but no field to play on. Taking this away would be a huge blow to the neighbourhood.

It is hard to believe that in the huge new development of the River District, the city cannot find space for a day care facility. It is mind blowing that city planners did not think of this in all the years that this area was under consideration. The official development plan from 2006 envisioned a daycare facility in the new 'town centre' which is currently under construction, but the planner spoken to said it was too close to a main arterial road: Marine Drive.

It would seem that there is plenty of space in the new development that could be used for this necessary amenity without taking another valuable amenity in another neighbourhood away.

So far none of this information has been readily available. Residents have had to investigate for themselves. The whole process seems to be shrouded in secrecy. Why has the city not told residents about the proposed changes?  Day care is vitally important, but so is recreation. So is consultation. There must be a way of resolving this conflict.

But first there needs to be dialogue with the community.

***UPDATE***
Since publishing this blog, the City held an open house on Wednesday, May 4, 2016 and has asked for input. You can give yours here.
Posted by Stuart Mackinnon at 12:37 PM