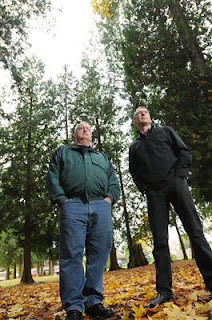 Some Champlain Heights residents say neglect of their neighbourhood's parks and trails by the park board is leading to increased crime.

Standing next to a grove of trees within Sparwood Park on Tuesday, Champlain Heights residents James Hampton and Rick Evans pointed to the heavy underbrush obscuring the view through the woods. The men say the natural cover allows partiers to drink and do drugs without being spotted by police. The small park, which links to the nearby larger Captain Cook Park via a trail, is located off Arlington Street near East 54th Avenue in Champlain Heights.

"You can watch the dial-a-dopers pull up in their cars and go in and out of the park," said Hampton, who's lived directly across from Sparwood Park for the past 10 years.

"There's all sorts of people hanging around now," said Evans. "This summer a guy got killed right across the road and there's isolated fires being lit all the time."

The residents point to the murder of Harpreet "Happy" Sandhu July 25 as evidence of increased violence in the community. Sandhu was shot and killed across the street from the park in the 6900-block of Whithorn.

The men say the neighbourhood is becoming the victim of what's commonly known as broken windows syndrome, through which physical neglect of an area attracts abuse such as graffiti. During a tour of the nearby Red Alder Walk and Birch Trail, Evans points out what he calls ongoing neglect by the park board, including broken picnic tables, blackberry bushes growing across park benches and branches either fallen or cut and left to rot among the trees. "Last October I counted 17 lights out along this pathway," Evans said. "Then a lady was attacked here after she got off the bus."

He added he and his wife found a stolen motorcycle on fire in the bush off one of the trails this past summer, but when they called 911 from the spot, police couldn't find them.

"It's just lucky it wasn't as dry in here as it was last summer or these houses could have been damaged too," said Evans, gesturing to a row of nearby townhouses. "All of these branches need to be cleared out of here. You would never see this neglect west of Main Street."

Hampton agrees the tree branches and brush should be cleared out to allow visibility in the parks and on pathways and trails. The men say parks staff told them there is no money in the budget for that kind of maintenance.

The men were joined on the tour by Green Party park board commissioner Stuart Mackinnon, who lives nearby. While Mackinnon defended parks staff, calling them "hard working," he acknowledged more needs to be done in maintaining parks. The poor maintenance of Vancouver parks has been a common complaint from residents across the city this past year.

"I have great pride in our employees," said Mackinnon, who is running for a second term on park board. "But there have been so many cuts they don't have the time to do the great job they used to."

VPD Const. Lindsey Houghton told the Courier there has been no recorded spike in crime in Champlain Heights.

Evans predicted that response from police. "We've stopped calling," said Evans. "It never did any good because even the police can't find these crime scenes."

Posted by Stuart Mackinnon at 11:07 AM