The Vancouver Park Board owns and maintains 159 playgrounds for your family to enjoy year-round.
Many of our playgrounds are at the end of their lifespan and need renewing to ensure they remain fun and safe places to play.

All of our playgrounds were inspected in 2015 for compliance with CSA standards. The findings identified playgrounds that need immediate upgrades and ranked them in order of importance.
Find out what playgrounds we will rebuild and remove in 2016, and the ones we plan to renew by 2020. Let us know how we should renew the removed playground locations.
Map of playground changes

We're rebuilding these playgrounds in 2016 using designs that reflect what we heard from the community during our public engagement process in 2015.

We'll replace these playgrounds between 2017 and 2020, and share updates here.

We're removing these playgrounds in 2016 due to their age, condition, and safety concerns. Nearby playgrounds offer a safe and enjoyable play experience.

There may be plans to renew these playground locations once the structures are removed. Tell us what you'd like to see in place of the structures below.

Questionnaire: How should we renew the removed playground locations?

We want to know what you'd like to see in place of the structures we're removing.

Tell us in our online questionnaires – one per playground – until April 1, 2016. Your responses will help us understand how to renew the playground locations.

Help Vancouver Park Board grow our urban forest: plant a $10 tree in your yard today! Buy a tree online at a heavily-discounted price and help grow our urban forest.

The Park Board tree sale has twenty-two varieties of trees available – fruit, flowering, shade, and conifer trees. You need to be a Vancouver resident to qualify.

Our tree sale is part of the first-ever Tree Week, April 2 to 10, and we expect it to become an annual tradition.

The $10 trees include:
Not sure what to choose? Play #Treelationships, our tree-matching game.
Our arborists selected these trees because they thrive in Vancouver’s diverse growing conditions and provide many benefits like food and pollination. The trees are worth about $75 each and aren't suitable for balconies or indoors.

You can buy up to three trees per household.

Pick up your pre-paid trees on:
We'll have a limited number of trees available for cash purchase.

Look for another tree sale this fall. We held a large public tree sale in fall 2015 in Stanley Park as part of Doors Open Vancouver.

Be our planting partners

“We’re selling 3,000 trees. It’s the largest tree sale that we’ve ever held and a great opportunity for you to do something positive for the urban forest,” said Vancouver Park Board Chair Sarah Kirby-Yung. “We have a long history of planting and caring for trees in green spaces and parks across Vancouver, but we need planting partners.”

Tree Week involves community plantings at Everett Crowley and West Memorial parks and a variety of talks, walks, and tours for you to learn about trees with your community.

Tree Week supports the our Urban Forest Strategy and Biodiversity Strategy.
Our Tree Week partners include:

Our canopy – the amount of ground covered by tree leaves, as seen from the air – has steadily declined over the past two decades. Today, 18% of Vancouver is covered by tree canopy, a drop from 22% in 1995.

By Lien Yeung, Maryse Zeidler, CBC News Posted: Mar 11, 2016 6:30 AM PT Last Updated: Mar 11, 2016 6:30 AM PT
A tree that fell on a home during a wind storm and killed a woman sleeping inside has raised questions about who is legally responsible for maintaining trees on public property.
Jill Calder died early Thursday morning when a tree broke through her roof while she was in bed. The one-metre-wide tree was located on a green belt behind her house in Port Moody, B.C.
Personal injury lawyer Shadrin Brooks says cities can't be held legally liable for a tree on public land unless there's evidence they have been negligent in maintaining the tree. An argument could also be potentially made if a tree was obviously dead or dying.
"They're not necessarily responsible for every accident that occurs," he said. "They have to have a reasonable policy and they have to follow their policy but they're not really responsible for every loss that occurs on their property."
Howard Normann, Vancouver Park Board's director of park operations, says four officers inspect every tree in Vancouver at least once a year, and additional crews do maintenance year-round.
He says despite the tragedy in Port Moody on Thursday, and the increasing likelihood of inclement weather due to changing climates, Vancouver's tree maintenance program will remain status quo.
"I feel comfortable that the program we're currently using is working," he said. "We didn't have that many trees that came down last night or this morning."
However, Normann says residents should notify the city if they see a tree that could be hazardous.
Posted by Stuart Mackinnon at 9:52 AM No comments:

Some of Vancouver’s parks barely have a single recycling or organics bin within them — big parks too, like Queen Elizabeth — and the “greenest” city says there won’t be anything committed until 2017 to address the oversight.

The issue was identified in a City Studio report conducted by Langara College students, who examined the number, locations and contents of bins at four Vancouver parks — Hillcrest, Queen Elizabeth, John Hendry and South Memorial.

The report found the vast majority, if not nearly all, of the bins were trash cans, many of them stuffed with recyclables or organic waste that could be diverted away from landfills.
Park Board commissioner Michael Wiebe said the lack of recycling facilities in parks is contrary to the city’s stated green goals.

“What’s been customary for Vancouverites is when we’re at the park ... people put their bottles beside the garbage bin and someone will come and collect them. But that’s not how our parks should look. That’s not part of the process. That has become common practice,” he said, adding there are about 30 trash cans per recycling bin currently present.

One of the issues is placement and design — and a potential idea, Wiebe said, could be implementing waste disposal stations with three openings — one coloured green for organics, a blue one for recyclables, and a black one for garbage.

“The Stanley Park cleanup happened because people made a fuss ... we shouldn’t have pool-sized amounts of garbage in Stanley Park,” he said.

“Creating the proper bins is one of the fixes we need.”

Albert Shamess, director of waste management at the city — which provides collection for the park bins — said the reason bins don’t already exist is due to “contamination.”

“In actual fact there isn’t a lot (of recycling bins) around city streets. One of the big problems has been contamination ... in addition to recyclables you see a lot of garbage,” Shamess said.

Shamess added the report to council will be made this fall, as part of submissions for the 2017 budget.

City of Vancouver
News Release
March 7, 2016
City and CP agree to landmark agreement for the creation of the Arbutus Greenway
The City of Vancouver (City) and Canadian Pacific Railway Limited (CP) have reached a historic agreement that will secure the legacy of the Arbutus Greenway for public use for years to come. The City has agreed to purchase the railway route from CP, which represents 42 acres of open space running approximately 9 km from Milton Street to 1st Avenue for $55 million.
“The City’s historic purchase of the Arbutus railway is great news for Vancouver,” said Mayor Gregor Robertson. “Thanks to this landmark agreement, the City will be able to transform the area into an outstanding greenway and connect neighbourhoods from False Creek to Marpole. This is a once-in-a-generation opportunity, not unlike New York’s High Line and other international examples. City Council is looking forward to the next steps in this process and to working with the community to enhance the greenway for all users.”
“For many years now, CP has been involved in conversations with the City about the future of the Arbutus corridor,” said Keith Creel, CP’s President and Chief Operating Officer. “We are pleased that today’s landmark agreement allows the City to create a transportation corridor and greenway while providing a fair return to CP and our shareholders.”
This agreement signals the end of a long negotiation process between the City and CP that lasted over four years, and ensures that Vancouver residents can continue to use the transportation corridor and greenway as a walking and cycling route. In 2013, the City included the Arbutus Corridor as a green transportation corridor in the City’s Regional Context Statement, approved by Council and the Metro Vancouver Board, and is now integrated into the provincially-approved Regional Growth Strategy. The City and CP are pleased to have arrived at this landmark agreement that provides new opportunities for the creation of a greenway.
City staff will now begin to look to improve or upgrade certain parts of the Corridor to enhance public space, and will launch a dedicated Arbutus Greenway Project Office to oversee the design process and solicit public input on the final design of the transportation corridor and greenway.
-30-
MEDIA CONTACT:
Corporate Communciations
604.871.6336
media@vancouver.ca
Posted by Stuart Mackinnon at 12:03 PM No comments:

Come out and see some great athletes! 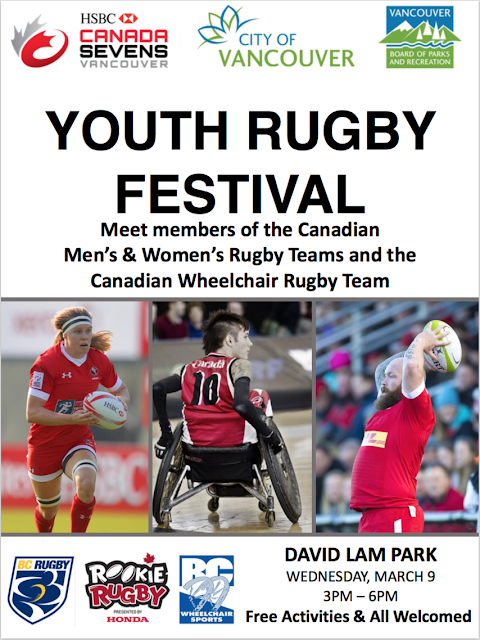 Posted by Stuart Mackinnon at 10:44 PM No comments: