Summer is often called the silly season in politics. Not enough news so news has to be manufactured. The summer before a fall election seems to be the silliest. Here in Vancouver we have an abundance of announcements coming out of city hall, with politicians all over the radio and TV. Letters flying decrying this or that, accusing each other of what not. It seems to me that a lot of people need a vacation.

As the election approaches I wanted to share with my readers something that was posted on another blog. An anonymous blogger who calls himself Glissando Remmy said that if he ever ran for anything this would be his platform:

‘I’ll do the best I can, with the resources at hand, for all the people of Vancouver. Period.’

Now that's a platform I think we could all support. I'm checking out for much of August. For the first part I'll be attending a mindfulness retreat with Thich Nhat Hanh called 'Awakening the Heart', and then hopefully heading out of town for a well earned rest. When I return I'll let you all know my plans for the autumn.

In the meantime try to get outside and enjoy the sunshine.
Posted by Stuart Mackinnon at 2:49 PM 3 comments:

A Martini with your putter?

The Vancouver Board of Parks & Recreation is considering serving alcohol on the greens and fairways of the public golf courses. I am very much looking forward to the staff report that will accompany this recommendation. According to park board by-laws consumption of alcohol is prohibited in our parks, however section 4 (a) (i) of the General Requirements allows the Board to grant permission to sell any food or beverage. So while it would appear that it is possible to sell alcohol on the courses, the question becomes is it good public policy to do so?

Advocates say that many golfers already consume alcohol on the courses and this will just legitimize this. They also point out that private courses have been doing this for years. I have a problem with both of these arguments. In the first case, some people drink and drive which is illegal. Do we change the laws just to suit those who break the rules? Of course not. As far as the argument that private courses offer this service, I compare this to the difference between serving alcohol in your backyard and in a park. Your backyard is a private area whereas a park is a public area. I don't think many people would advocate selling alcohol on our playing fields or picnic areas.

So then the argument comes down to money. Profit. The argument becomes one of the loss of potential revenue. I contacted MADD (Mothers Against Drunk Driving) to see what they thought about this. They recognized that this is already happening on private courses, and that with proper procedures such as not serving anyone who has already been drinking, limit the hours of service, limit maximum number of drinks served to 2 per 18 holes, cost the drinks higher than the cost at the bar, and have a program to offer alternative transportation if needed, it was possible. However, they also said if these were not put in place and it is being done for profit they would not be supportive. The last bit was what caught my attention.

Why would the Park Board serve alcohol on the courses? Does alcohol somehow enhance the game or make players play better? Do golfers avoid public courses because alcohol is not served on the greens? If not then why, other than profit, would we serve alcohol? These are some of the questions I am looking forward to hearing answers to.

Often we hear about the slippery slope - that if you do something in one place it will be continued in another. I am quite concerned as alcohol is often seen on our public beaches. Would we next be setting up bars or liquor trolleys at Jericho or Kits beaches simply because people are already drinking there and we are losing out on an opportunity to make money? I think public spaces should be free from alcohol sales and consumption. These are places that belong to all of us. There are plenty of places to enjoy a beverage, including the clubhouses at our public golf courses--do we need to extend this to fairways and greens?

I look forward to the staff report and input from the public.

Posted by Stuart Mackinnon at 9:01 AM No comments:

Meadows in our parks? 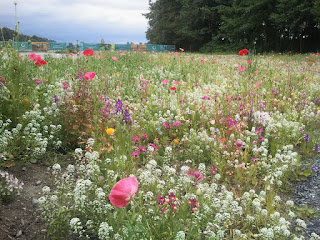 There has been a spin attempted on the lack on maintenance in some of our parks and public spaces. It is being called the 'meadow look'. Well just for the record, to me this is what an urban meadow should look like (click on the picture for a better look). This is an area behind the sales office for the New Water development in my neighbourhood of East Fraserlands or the River District as it has been re-branded. This 'meadow' took a bit of thought and care. It wasn't simply abandoned or neglected parkland. If it had it would be full of weeds and brambles.
Posted by Stuart Mackinnon at 3:34 PM No comments:

The "meadow look" is just a euphemism for budget cuts at the park board. Parks and boulevards look unkempt because the money needed to keep them tidy and trim was cut by city council in last November's budget, something I fought against. If the park board wanted to make some park areas into meadows I would support the idea going out to public consultation.

The problem is making them into meadows would cost money--money to dig up the grass and then plant native species. Instead we have invasive species like morning glory, Himalayan blackberry and English ivy running rampant. We don't have meadows full of wild flowers, but unkempt parks full of weeds. Meadows? Absolutely, but let's have that discussion. And let's have full funding for parks and recreation in the meantime.

Posted by Stuart Mackinnon at 8:22 AM No comments: