Courtesy & Democracy hit a new low at the Park Board

At the scheduled meeting of the Park Board tonight, Vision Vancouver hit a new low for courtesy and democracy. After the usual slide show of Commissioner events, the chair of the Planning and Environment committee announced to the public that the next meeting of that committee would be postponed so Commissioners could instead address City Council at its budgetary public hearings. A nice idea, but one that courtesy would suggest discussing with other members of the committee before announcing it publicly.

The Chair of the Board then announced that the only item of the agenda--the proposed budget initiatives--would be deferred by the Board and so no decision would be made. This announcement came even before the report had been brought to the table. Never in all my years working on Boards have I come across a Chair that announced the result of a vote before the motion had appeared. Granted Vision Vancouver has a majority on the Board and can do whatever they please, but this smacks of outrageous arrogance.

A year ago, during the last budget discussion, Vision declared that this Board would now work, not as a consensus board, but as government and opposition. This year they have dropped even the pretense of listening to any other view than their own, and now do as they please. So much for democracy.
Posted by Stuart Mackinnon at 9:30 PM 1 comment:

Vancouver could get a black eye from the “sloppy” maintenance of its parks, due to a $1 million cut in service.

“I think we’re really shooting ourselves in the foot,” said Green Party park board commissioner Stuart Mackinnon Friday. “Vancouver has always prided itself on what a beautiful city it is.”

The Vancouver Board of Parks and Recreation will vote Monday on a staff report recommending $1.03 million in cuts to its operating budget.

Included in the report are plans to cut maintenance and close some park washrooms, at a cost of $300,000, plus a 10-per-cent cut in flowers and shrubs at tourist hotspots like Stanley Park and English Bay.

“People come there to see the flowers,” said Mackinnon. “There has been talks about cuts in the rose gardens, which I think would be a huge mistake.”

Other proposed cuts include extending the street pruning cycle from once every seven years to once every eight years, reducing security and charging for the youth use of grass fields.

Mackinnon said that while city park budgets may have gone up by $1.8 million, that’s not enough to cover current operating costs.

Park board chairman Aaron Jasper, of Vision Vancouver, said the board has been asked by city hall to “whittle down” costs but has reached a “tipping point” when it comes to cuts.

“We’re scraping the bottom of the barrel,” he said. “There aren’t a lot of good choices.”

He said the proposed cuts on washrooms would affect 40 per cent of the city’s parks.

“That’s a serious issue,” he added. “If we hadn’t put the washrooms on the list we’d be faced with a lot of bad options.”

Vancouver Mayor Gregor Robertson’s office said last week the park board budget has gone up from $95 million last year to $96.8 million for 2011.

But Vancouver parks and recreation general manager Malcolm Bromley said Friday that last year’s parks budget was actually $99.3 million and $4.3 million in sanitation and information technology work is being transferred to the city, leaving $95 million.

Given inflation and rising costs, the board needs between $97.5 million and $97.7 million to pay for the same amount of services in 2011, he said.

© Copyright (c) The Province
Posted by Stuart Mackinnon at 9:52 PM No comments:

“This is another example of the Vision Vancouver park board caucus not advocating for the protection and adequate funding of the park board. Clearly they are getting their marching orders from the Mayor’s office on how to vote. It’s time they stand up and say no more cuts”, says Park Board Commissioner Ian Robertson. "It's clear that the Mayor and his colleagues have decided that chicken coops and bike lanes are more important than community centre programs for children and the elderly. This shouldn't be about politics, it should be about supporting families and the aged."

“The Vision Vancouver commissioners have the opportunity this year to finally stand up to their city council comrades and say enough is enough. It is now time to start re-investing in our parks; time to encourage recreation”, adds Commissioner Mackinnon. “Times are tough—I know that. But when the economy is hardest hit is when people need their neighbourhood parks and recreational services the most”.

Another $1.03 million budget reduction for the Park Board

The Park Board budget proposals were released today. The complete proposal can be viewed here. The reductions include:

$700,000 to Park Services including - closing some public washrooms; eliminating night security at Andy Livingstone Park; reduction in flower and shrub beds by 10% in downtown, Stanley park, English Bay, and around Community Centres; reduction in street tree pruning from every 7 years to every 8 years; and eliminating mowing in 14% of passive turf areas in parks and medians.

$300,000 to Recreational Services including - introduction of fees for youth using grass fields.

More on this to follow.
Posted by Stuart Mackinnon at 12:39 PM No comments:

Is this the least progressive Park Board in living memory?

Last Monday night the Park Board approved a new and revised fee schedule for Park Board recreational services. This revised schedule included the lowering of the age of children’s fees to 3 years from 6. Up until now children 5 and under were considered preschoolers and did not pay. I moved an amendment to the fee schedule to return the preschool age to 5 years and under from the new 2 years and return children to age 6. COPE Commissioner Loretta Woodcock seconded this amendment and supported it. It was defeated with all Vision Commissioners voting against it.

I moved the amendment as I believe this is an unfair burden to put on parents of young children. I simply don’t understand how bringing in new fees for toddlers will generate a significant amount of revenue for the Board. It will most probably discourage parents and children from being active and this will have long lasting costs for all of us. This new fee for young children follows the reduction in Community Centre programmers, a summer of cut-backs in playground programs, and the closing of the Kids Street Clubhouse after-school care program.

Since being elected in 2008, this Board has made more cuts to programming and park maintenance than in all the years of the previous decade combined. Last year alone saw a combined total of nearly $4 million in budget reductions to the Park Board. Since 2008, Recreational Services have been reduced by $1.7 million and Parks Maintenance by $1.2 million.

It is hard to imagine any more cuts to our Parks and Recreation system, and yet we are facing the possibility of an additional $2 million in reductions this year. If Vision Vancouver thinks our parks are a luxury that we can afford to neglect or forget; if they think that recreational services are not an integral part of our city; if they think they can dismantle what has taken more than 100 years of progressive voices from all shades of the political spectrum to build, then they are sorely mistaken. Vancouverites will not sit idly by and watch their community programming dismantled; they will not sit back and watch as their parks and gardens are neglected.

It is time Vision Vancouver stopped and took a really good look at what they are doing to our city. It is time they asked themselves if this is what they were elected to do.

The Vision Vancouver commissioners have the opportunity this year to finally stand up to their city council comrades and say enough is enough. No more cuts. It is now time to start re-investing in our parks; time to encourage recreation. Times are tough—I know that. But it is when the economy is hardest hit that people need their neighbourhood parks and recreational services the most.

It is time to make parks and recreation a priority.
Posted by Stuart Mackinnon at 11:54 PM 6 comments:

At Monday night's Park Board meeting the Board finally approved the demolition of the Jericho Marginal Wharf. The decision--or lack thereof--has been in the works since before this Board was elected. In the summer of 2008 staff recommended the wharf be removed for safety and environmental reasons. The wharf was deemed unsafe and had been fenced off. The newly elected Board overturned that recommendation and sent the whole thing out for further public input. I felt at the time that the public process already done was adequate and that the staff recommendation was correct.

At the end of the day, the new public process could not come to any consensus and the Board was met again with a staff recommendation to tear down the wharf and return the area to its natural state. This time the recommendation passed unanimously. A long and twisting path that end up right where it started from. It prolonged the community angst and kept an area of our foreshore fenced off far longer than necessary. It was the right decision on Monday night, just as it was the right decision two years ago. All's well that ends well I suppose.
Posted by Stuart Mackinnon at 7:42 AM 1 comment: 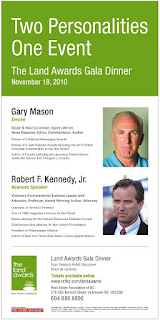 Looks to be an interesting evening. To purchase tickets, click on the poster. For more information from one of the adjudicators click here.

Posted by Stuart Mackinnon at 8:55 AM No comments:

Not a parks blog today, but a celebration of freedom for 'An unwavering champion of peace'. Aung San Suu Kyi was released today. You can read more here.

And acknowledgement of the passing of a great contemporary composer. "We are sorry to confirm the news that Henryk Mikolaj Gorecki has passed away," Beata Jankowska-Burzynska, an official with Polish Radio's National Symphony Orchestra in the southern city of Katowice, said Friday. You can read more here. And here is a link to part of his Symphony No. 3 "Symphony of Sorrowful Songs"

"In the midst of life we are in death." Book of Common Prayer

Posted by Stuart Mackinnon at 11:13 AM No comments: