Vancouver Park Board
News Release
January 12, 2016
The Vancouver Board of Parks and Recreation has endorsed 11 ambitious strategies to advance the historic work of the Truth and Reconciliation Commission in its programs and facilities.
The strategies address critical themes identified by the Commission including language and culture, commemoration, professional development and training for public servants, education for reconciliation, youth programs and sports.
Specific measures adopted by the Board Monday night include a “360 degree” approach to programming in culture, health and sport in order to increase public awareness and support for First Nations children, youth and elders in Park Board programs. In addition, the Board will establish a program for native and non-native artists to collaborate on works inspired by reconciliation themes and carefully consider aboriginal rights in granting permits for special events and sport hosting.
The Board also reaffirmed its commitment to its precedent-setting intergovernmental consultation with First Nations on stewardship of Stanley Park and other park lands.
“I’m very proud the Vancouver Park Board is the first municipal government body in Canada to implement recommendations in response to calls to action provided by the Truth and Reconciliation Commission (TRC),” said Chair Sarah Kirby-Yung.
“The Board showed leadership early in its mandate, including a historic meeting with the Musqueam, Squamish and Tsleil-Waututh Nations, and is already engaged in substantial work related to the actions identified by the TRC.”
The Board’s actions were applauded by organizations working with the aboriginal community.
“I’m pretty stoked to see Vancouver Park Board working to implement Truth and Reconciliation recommendations,” said Scott Clark, Executive Director of Aboriginal Life in Vancouver Enhancement.
“All vulnerable children, families and Elders should have full access to the many programs that the 24 community centres deliver. This is how we create inclusive, reflective and engaging centres.”
After the TRC released its findings last spring, the Board asked staff for an action plan. The staff report recommended that the Board make changes related to many of the TRC’s 94 calls to action, leading to the 11 strategies adopted last night.
The Truth and Reconciliation Commission of Canada aims to redress the legacy of residential schools and work toward reconciliation between Canada and its Aboriginal peoples.
- 30 –
Media contacts:
Vancouver Park Board
604-257-8699
vancouver.ca
Posted by Stuart Mackinnon at 2:02 PM No comments:

Keep it green this holiday season and recycle your Christmas tree

City of Vancouver
Information Bulletin
January 4, 2016
Keep it green this holiday season and recycle your Christmas tree
It’s that time of year again. The holidays have come and gone and now it’s time to figure out what to do with the Christmas tree!
Vancouver residents have three green options this month for recycling their live, cut Christmas trees. Prepare trees for recycling by removing all tinsel and decorations — this is important as these materials will contaminate the compost.
In partnership with the Lion’s Club, residents are invited to bring their Christmas trees to one of the four locations listed below on Saturday, January 9 and Sunday, January 10 from 10:00 am to 4:00 pm.

Donations of cash and non-perishable food items will also be accepted and will be distributed to local charities.
Residential Collection
Christmas trees will be collected city-wide the weekend of January 16-17. To ensure your tree is collected, please set it out before 7:00 am on Saturday, January 16. Trees should be set out on their own and laid on their sides. Do not put your tree inside your Green Bin or bag or bundle it.
Free Drop-off at Landfill or Transfer Station
Christmas trees can be dropped off until January 31 — at no charge — to the Vancouver South Transfer Station or Vancouver Landfill.
For more information on recycling Christmas trees and other yard trimmings, visit vancouver.ca/christmastree.
-30-
Media contact:
Corporate Communications
604.871.6336
media@vancouver.ca
Posted by Stuart Mackinnon at 10:48 AM No comments: 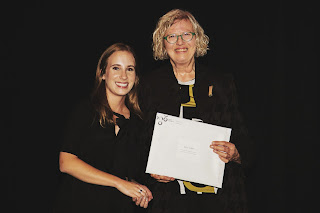 OCAD University Professor Emerita Beth Alber is the 2015 recipient of Craft Ontario’s John and Barbara Mather Award for Lifetime Achievement. This is one of the most prestigious markers of exceptional commitment to the development of craft in Ontario.

Alber is a celebrated master maker, in both silversmithing and public art. She is also an influential instructor and mentor who began teaching at the Ontario College of Art in 1979. From 2002 to 2009, Alber served as chair of OCAD U’s Material Art & Design program. She was appointed associate dean of the Faculty of Design in 2010 and, after 33 years of service, retired from OCAD U in 2012.
A member of the Royal Academy of Art, the Society of North American Goldsmiths, Women’s Art Resource Centre and CARFAC, Alber has exhibited her work widely across Canada. Her best known project is the commission of public art for the Women’s Monument Project in Vancouver, BC. Alber served as a board member at the Ontario Crafts Council from 1986 to 1988 and 1995 to 1997, and was president of the Metal Arts Guild of Ontario from 1985 to 1987.

Since 1981, the John and Barbara Mather Award has been presented to individuals who are “truly outstanding in their fields and have displayed exceptional commitment to the further development of craft in Ontario and throughout Canada.”

Posted by Stuart Mackinnon at 11:24 AM No comments: