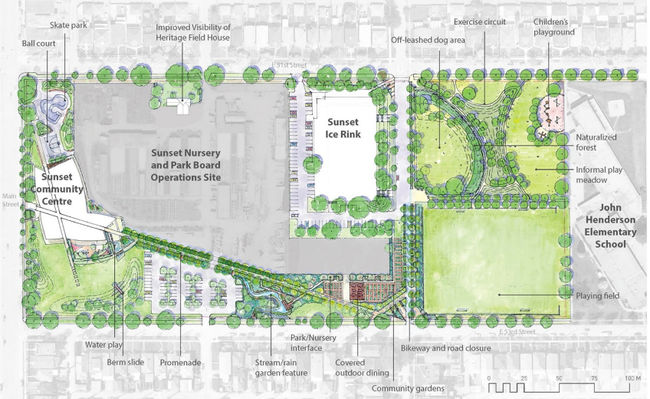 Vancouver Park Board is proposing to spend $3 million to update the city’s Sunset Park — with new pathways, a playground, skateboarding, and a basketball facility in the books.

Board commissioners are expected to vote on Monday on whether to approve the plan after a pair of open houses were previously held for nearby residents.

The vast majority of the feedback had suggested the park needs more natural forest areas, particularly around the historic stream that runs through the park, and that new paths were needed to take park around the 3.4 hectare property.

Currently, the park has a large area to its northeastern quarter that’s relatively unused and being proposed as the site of the new playground, a relocated dog off-leash area and an exercise circuit.

The skatepark and basketball court, meanwhile, are being proposed adjacent to the community centre along the park’s Main Street face.

The Park Board currently has secured $700,000 of the funds it requires to make the upgrade happen. It expects additional funding to be accessible in the 2017 budget. Construction is also expected to begin in 2017.

Posted by Stuart Mackinnon at 9:59 AM