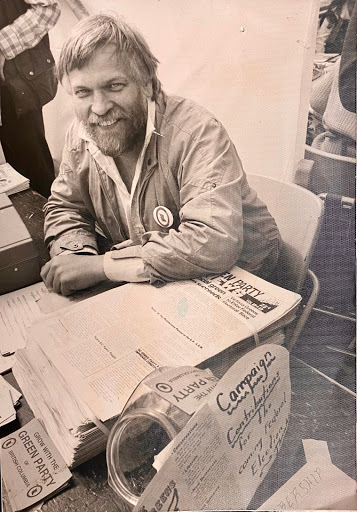 VANCOUVER, B.C. – Paul George, co-founder of  North America’s first Green Party, the Green Party of B.C., and co-founder of the British Columbia-based (Western Canada) Wilderness Committee is being awarded the Order of B.C., the highest recognition that the Province grants to any citizen.

The Order of B.C. is the Province’s highest honour for individuals who have served with great distinction or excelled in their field; inspiring individuals who have left a lasting legacy and whose extraordinary achievements have contributed to a better quality of life in the province.

“This is a great honour that everyone who helped make a reality and worked to build the Green Party should share, for it was always a group effort, not a one-person show,” said George.

"But I would rather have the Provincial Government stop the liquidation of the last one percent of the big-treed ancient forests of B.C. and quit promoting fossil fuel projects and rapidly reduce greenhouse gas emissions, because with global warming coming at us at super-pandemic-speed, all of our successful efforts to protect nature will be for naught."

George was his wife, Adriane Carr’s, campaign manager when she ran for the Vancouver School Board in 1984 as a Green Party candidate, along with several other civic Green candidates. This was the start of the Vancouver Green Party. He has been a key part of the campaign teams in all of Carr’s election campaigns, including the last three successful Green Party of Vancouver campaigns.

More recently, George co-founded the Action-in-Time Society,  focused on action to combat global warming. George has been a consistent opponent of the Trans-Mountain Pipeline and passionately believes that we must act with urgency to curtail Greenhouse Gas emissions and convert our economy to rely on truly sustainable renewable energy.

George is incredibly grateful to those who endorsed him for this award, including David Suzuki and Wade Davis

Posted by Stuart Mackinnon at 3:05 PM