#StopKinderMorgan: My presentation to the KM Panel

Yesterday I sat for 7 hours listening to impassioned, articulate, and knowledgeable citizens speak to the Kinder Morgan expansion hearings. Every single speaker asked the panelists to not recommend the twinning of the TransMountain oil pipeline. After 6 hours I was given the opportunity to make my statement. Below is a transcript of my remarks: 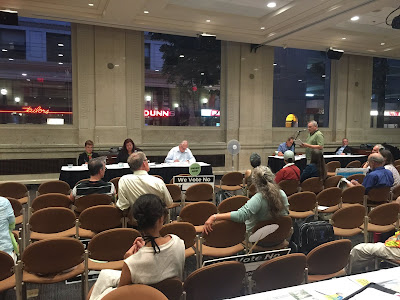 Good evening, my name is Stuart Mackinnon, and I am an elected Commissioner of the Vancouver Board of Parks and Recreation.
The Vancouver Park Board is the only elected body of its kind in Canada. Formed in 1888 as a committee to manage the new Stanley Park, its history is as old as the city itself.

It has exclusive possession, jurisdiction, and control over more than 230 public parks in Vancouver and a large public recreation system of community centres, pools, rinks, fitness centres, golf courses, street trees, marinas, playing fields, and more.
The elected nature of the Park Board and the strength and focus of its mandate have resulted in urban parks and recreation that today give Vancouver an enviable and esteemed position world-wide.
Our mission as a Board is to provide, preserve, and advocate for parks and recreation services to benefit all people, communities, and the environment.
I am here today to do just that: to advocate for the preservation of our unique and beautiful environment. An oil spill could have catastrophic consequences for Vancouver. I speak specifically to our shoreline surrounding Stanley Park, English Bay, Crab Park, the beaches of Kitsilano and west Point Grey and the entire foreshore between and around these iconic places.
Oil spills have happened before, and there is no one—NO ONE—who can guarantee that they won’t happen again. In 1973 in the span of a month, two separate freighter incidents on Burrard Inlet resulted in the spillage of bunker fuel oil. Beaches and shoreline in West Vancouver were coated in oil. Local observers noted the immediate ecological effects of the oil spill, particularly the impact on wild birds. SPCA officials predicted difficulty in capturing, cleaning, and rehabilitating oil-covered birds. One West Vancouver resident reported finding two birds “coated in at least two inches of bunker oil.” Another resident of Bowen Island found a dead bird completely smothered with oil. Federal environmental officials began to receive reports of dead fish in English Bay and off Bowen Island.
The Vancouver Sun wrote of this event: that, obviously, human error was inevitable and that “No one needs to be told that man is fallible, the gods whimsical, the immutable combination that makes obscene nonsense of assurances of safety on the proposed West Coast tanker run.”
In 2015, as you have heard earlier, another spill of bunker oil resulted in a clean-up of our pristine shoreline at English Bay. By any measurable standard these were small spillages, and yet they had significant effects on our environment. These events were of great concern to members of our community who enjoy walking, swimming and playing in a safe and beautiful environment. It is unimaginable what a catastrophic oil spill would do to our beaches and shorelines.
As the custodian of our beaches and parks I implore you to deny this application. We know that it is not IF but WHEN the next spill will occur. Will it be a catastrophic one or a minor one? It really doesn’t matter. The outcome will damage our beautiful city and shorelines. I am charged by the electorate to preserve, promote and protect the local environment.  I hold that to be a sacred trust. I will do all I can to protect our precious shorelines and waterways. The risk of oils spills is too great and is unacceptable to the people of this city.  The citizens of Vancouver gave me a mandate when they elected me. Today I use that mandate to ask that there be no expansion of oil shipping in our waterways. Please say no to the Kinder Morgan expansion. 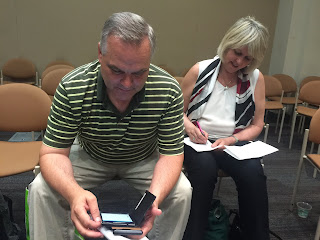 waiting to speak with Cllr. Adriane Carr (photos: J.Miller)
Posted by Stuart Mackinnon at 8:21 AM