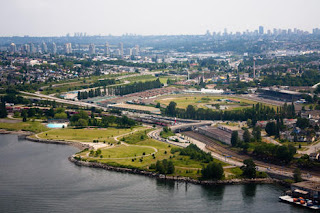 Hastings Park is a park, so it falls under the jurisdiction of the Vancouver park board, right? Well, it’s not, and Coalition of Progressive Electors park-board candidate Brent Granby and Hastings-Sunrise resident Barry Sharbo think that situation should change soon.

But according to Vision Vancouver city councillor Raymond Louie, it’s “premature right now” to determine the appropriate governance model for the site.

Louie is seconding a motion on the October 6 agenda of council asking staff to consult stakeholders about the future governance structure for the city’s second-largest park.

In a phone interview with the Straight, Louie maintained that the 66-hectare city-owned area is not just a park but a multifaceted space. It’s the site of the annual fair at the Pacific National Exhibition and the Playland amusement grounds, which are administered—along with other civic buildings like the Pacific Coliseum—by the board of the PNE, of which Louie is the chair.

It hosts the Hastings Racecourse, for which the Great Canadian Gaming Corp. pays a lease to the city. It’s the home of E-Comm, which provides 911 service and emergency dispatch service, mostly for Metro Vancouver. South of East Hastings Street, and also part of the parkland, is the Hastings Community Centre.

“All of these are currently controlled by council, ultimately by council,” Louie said.

For COPE candidate Granby, that’s not an ideal arrangement. “Is it an amusement attraction or a park?” Granby asked in a phone interview with the Straight. “I think it’s a park.”

Sharbo will address council on October 6. He has previously criticized what many consider as the PNE’s control over Hastings Park.

“It’s like a fiefdom,” Sharbo told the Straight by phone. “It’s a self-perpetuating entity like any big bureaucracy. And, unfortunately, what happens is that organized labour and this group, they’re in harmony with each other.”

Park commissioner Stuart Mackinnon of the Green Party of Vancouver is reserving his final opinion. “Many people in the community, and I happen to be one of them, think that Hastings Park should be governed as a park,” Mackinnon told the Straight. “But I’m wanting to hear what the community at large has to say.”