Starfish on the beach 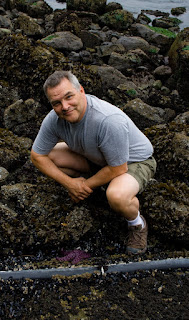 When I was a wee lad it seemed our beaches and foreshore teemed with life. There were sand dollars, sea stars and all sorts of shellfish around. We would put on our 'clam diggers' and go down to Spanish Banks and dig for hard clams, while others were out digging for geoducks. We actually had to be careful on some parts of the beach as we might cut our feet on the shells of the clams.

Alas that seems to have all but disappeared. Where has all the life gone? I'm sure I'll get a complaint that if I look hard enough there is abundant life in tidal pools and other areas--but that's the point--I have to look hard to find it.

Today while walking around the Stanley Park sea wall I was thrilled to see this sea star. One of my companions, who grew up in Vancouver, had never seen one before outside of the aquarium. My other companion, who has recently moved to Vancouver, couldn't believe it when I told my story of abundant sea life on the foreshore.

I live down by the Fraser river and often see people fishing from the shore. They catch quite a bit and always take it--no matter how small. I see folks fishing all along the Stanley park foreshore and wonder if they too keep everything. 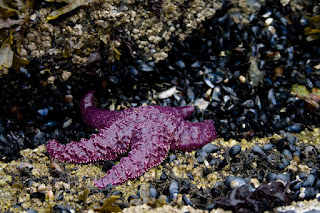 I hope one day our beaches and foreshore can again teem with life and children don't have to visit the aquarium to see what they should be able to see naturally outside their door. A report in the Vancouver Sun in June suggests that global warming is actually having a positive effect on the purple ochre sea star population at Jericho beach. This could be why we saw the sea star today.

So maybe, if we can survive the rising waters and adapt to the changing climate, we might see more sea life around Vancouver after all.
Posted by Stuart Mackinnon at 6:11 PM