Which Parks Board candidate will you choose?

COPE? Vision Vancouver? Green Party? NPA? Independent?
How about one of each, then your next favorite!
by Todd Wong, Gung Haggis Fat Choy 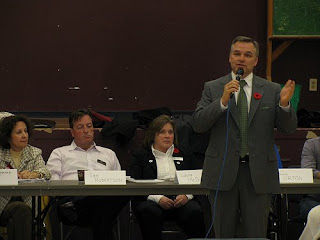 Stuart Mackinnon is the only Green Party candidate in the 2008 Vancouver civic election. Ivan Doumenc of the Work Less Party, as well as independents Jamie Lee Hamilton, Thomas Lockhart and Richard Mayencourt.

It was a busy night, I arrived just before 8pm, on a night when many people were more interested in the U.S. Presidential election results.

There were about 50 to 60 people attending, and I could count 6 active dragon boaters in the room + 3 of the candidates that I had tried to recruit for our team.

With 15 candidates attending, the moderator did a good job of spreading out the answers from the candidates as she tried ensure that that everybody got a chance to address the issues.

If you wanted to ask a question, you had to write it down and hand it to a handler - where it was inspected for suitability.

My question was:
Our community centres are under-utilized and under-recognized for the important role that they play in making culture and diversity accessible to our citizens. What will you and your party do to better represent the cultural needs and representation of Vancouver's diversity?

It was the most popular question of the evening for the candidates as many of them wanted to answer it. Raj Hundal gave an example of how the Roundhouse had recently celebrated the Diwali Festival, and how important it is for ethnic communities to become involved with the community centres.

Stuart Mackinnon gave a very good example of how many factors all play roles in transportation issues. He cited that one of the tour operators has given tours to the special needs teens that he teaches at Killarney Secondary School, as a way to "give back to the community." There are many factors, and Mackinnon emphasized that stake holders must be included in the process.

My question that did not get asked was deemed "beyond jurisdiction" and a "labour issue." I had wanted to ask that "given the long civic strike last year, how would each of the candidates and their party work to avoid or address the loss of important services such as community centres, pools, ice rinks and libraries to our citizens.

It's unfortunate that the question could not be asked, because it was terribly painful to see our parks grow steadily neglected and the trees dry out because of the protracted civic strikes caused by the inability of the GVRD labour relations bureau to negotiate fairly and reasonably, as they consistently walked away from talks with each of the three civic unions. It was a shame that only a few weeks after schools let out for summer that the swimming pools were closed, and that all the summer community programs were closed, leaving children and their parents to find alternatives if possible.

I had followed the library strike carefully, since I was a Vancouver library employee forced onto the picket line, because the GVRD labour relations bureau wasn't going to deal with our small CUPE 391 local, until it had completed its priority with the two larger CUPE 15 and CUPE 1004 (city inside and outside workers) first.

The protracted civic strike was a lose-lose-lose scenario. The citizens lost. The workers lost, and the NPA dominated city council and mayor looked like bullies. All the municipalities surrounding Vancouver were able to settle with their workers leaving Vancouver the only city forced into an unnecessary strike. For this coming election, it will be important to elect progressive parks board commissioners and city councilors who will look for solutions instead of confrontation.

Two weeks into the strike last year, it was Vision councilor Raymond Louie who called for mediation - which was rejected by NPA councilors. Three months later, the strikes are solved by mediation - almost 90 days later. For these reasons, I am supporting the COPE / Vision / Green candidates for the Vancouver civic election + the fact that I think they are accomplished individuals, and wonderful people.

Gung Haggis Fat Choy
Posted by Stuart Mackinnon at 10:44 AM